Where to see Mola Mola or sunfish in Bali ? Read the stories of our best dives with Mola Mola in Nusa Penida. Join us and meet your 1st one !

What is Mola Mola fish ?

Many divers come to dive in Bali and more precisely to Nusa Penida from all over the world just to meet the famous Mola Mola fish also called sunfish. This fish is indeed the heaviest bony fish that you can meet in the world. It grows throughout its whole life, from a few millimeters in the larva state up to several meters in diameter in adulthood. You cannot miss it with its characteristic shape, oval, seen from the side and flat, seen from the front, with a large dorsal fin and a large anal fin. Especially when you come across a specimen that weighs more than a ton.

It is a pelagic fish and lives very deep, down to 600 meters. But you can regularly meet him in Bali, close to the surface, between July and October each year. Researchers have indeed proved that it follows the seasonal upswings of cold water which bring with them nutrients, a phenomenon called upwelling. 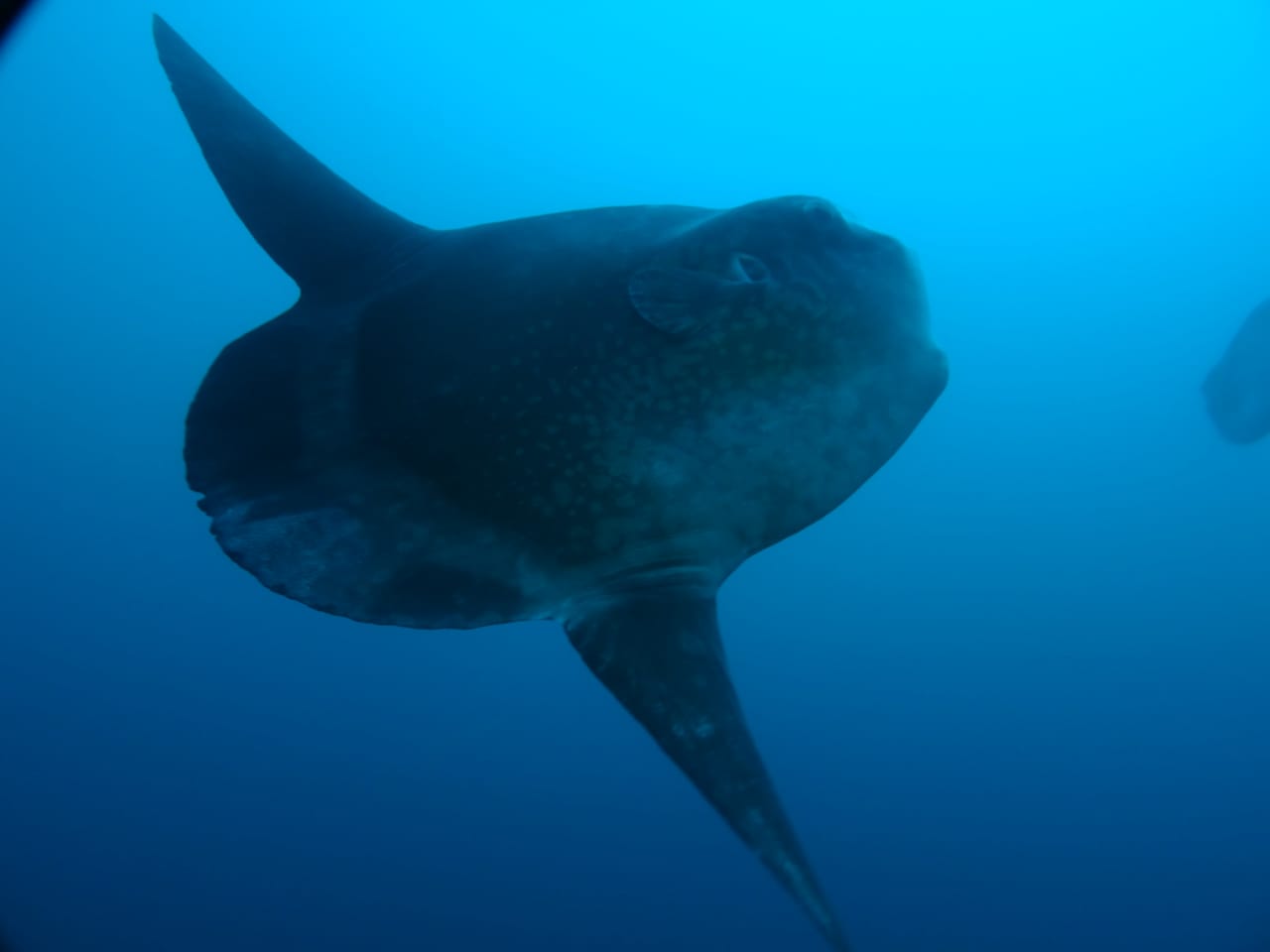 Mola Mola in Nusa Penida Bali seen from the side

Its name comes from the Latin mola which designates a millstone, a large round stone, flat and gray. Like for example the wheel of the old water mills. Its round shape would also have inspired its name in English (sunfish). But also in Italian (pesce luna), in Spanish (pez luna) in Portuguese (peixe lua) in German (mondfisch) or in French (poisson lune).

What do Mola Mola eat ?

Mola Mola eats mainly jellyfish, but also on zooplankton, squid and small crustaceans. And since this diet is poor in nutrients, it must consume a large amount. A 120 kilo Mola Mola should thus ingest 70 kilos of jellyfish every day to cover its calorie needs!

More than 40 species of parasites can live on and under the skin of a sunfish. This would also explain its seasonal urge to shallower depths. Where the cleaning fish, such as the banner fish, help it to get rid of its parasites. The sunfish also sometimes exposes its flanks to the surface to allow seabirds to feed on its parasites. We even saw a small one at Tugu jumping over the surface of the water in what would be an extreme attempt to dislodge the parasites from its body. 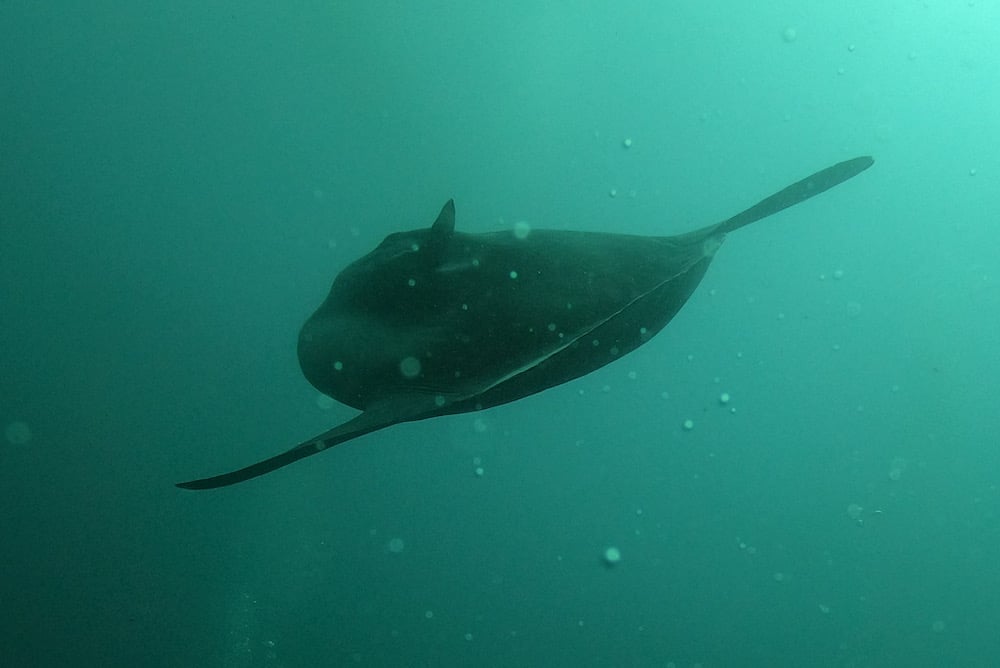 Mola Mola seen from below

Where to see Mola Mola in Bali ? and when ?

The Mola Mola season runs from July until October, in conjunction with upwelling. With the right guide, the probability of seing one is close to one in three.

You may meet them at any diving site in Nusa Penida island. But the most famous site is Crystal Bay dive site. The configuration of the site makes it possible to approach the channel located between Nusa Penida and Nusa Lembogan while being protected from the current, sometimes violent. We usually stand by one of the rocky points of a small island off the bay. It’s called the second corner.

The search for a Mola Mola is like a quest. And this is where all the talent of your guide will be expressed. A good guide will indeed bring you to the best place to watch it, while staying safe.

If you feel the thermocline and if you see a school of banner fish waiting for something, look in the blue, a sunfish should not be very far away. 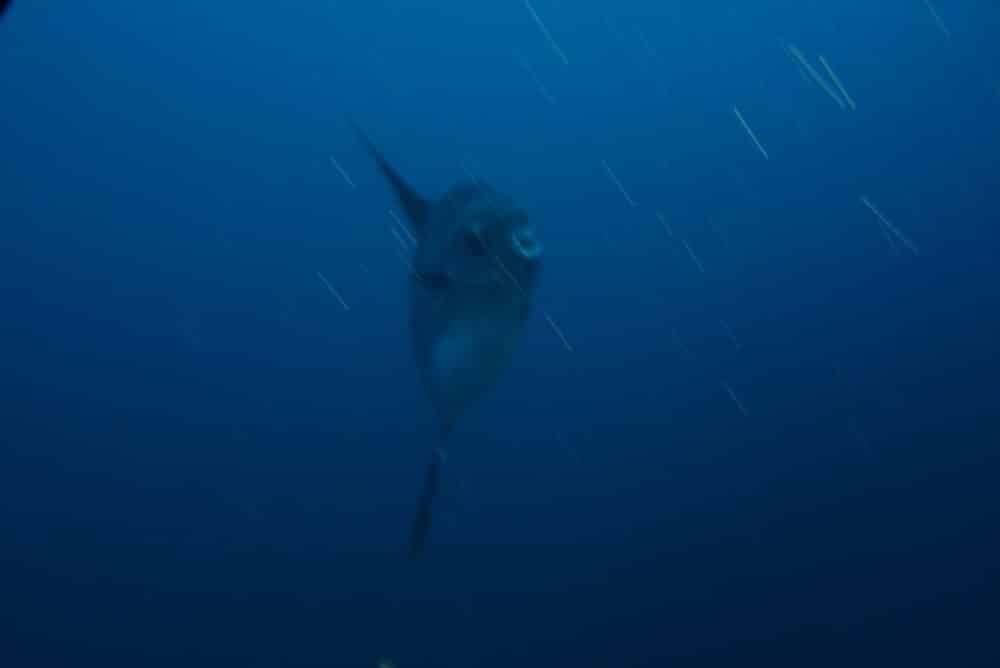 Front view of a sunfish

Our best dives with Mola Molas

You will probably remember all your life your first Mola Mola ! In my case it was on September 1st, 2017. I had just returned to Nusa Penida from Paris. After a couple of days looking for one we matched the perfect conditions, at Crystal Bay. I had my GoPro with me and when I saw Yann going into the blue, I said to myself : Bingo! At 25 meters, my first one. The video is pretty cool. He approaches Yann, turns around, then is immediately joined by a second one.

The show is magical, and time stands still. I have seen many more afterwards! 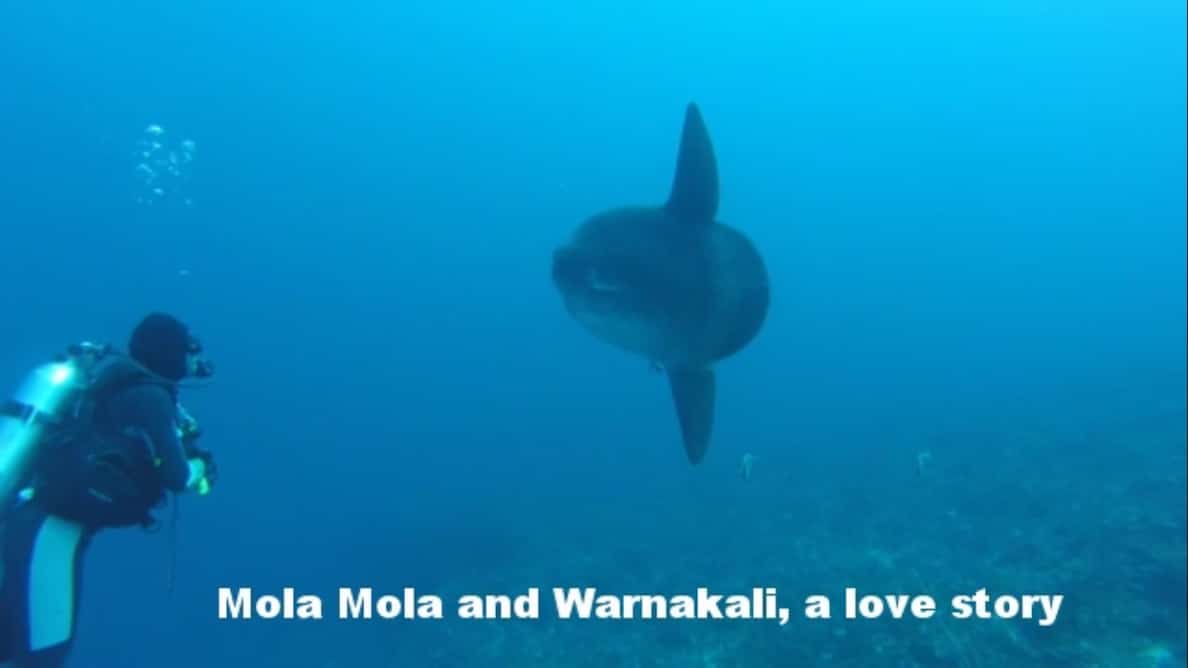 Some time later we were diving Ped with guests. At the end of the dive we felt the thermocline. A first mola-mola comes to us. The guests are happy. Then a second, everyone is very excited. But when we saw the third one, everybody were super thrilled. The guide of another group who was next to us made a somersault underwater!

October 8, 2018. There three of us, with Yann and Marion, at Gamat Bay. There is no current which is quite rare and Yann has the intuition that it is worth going towards the blue, in the channel. And there …

“During a dive there we stopped to admire one Mola Mola, then two, then three, until we realized we were on Sunfish highway, surrounded by fourteen of them ! Lucky you want to say? It all depends on the guide! So get your fins! ”

The video is pretty cool too! 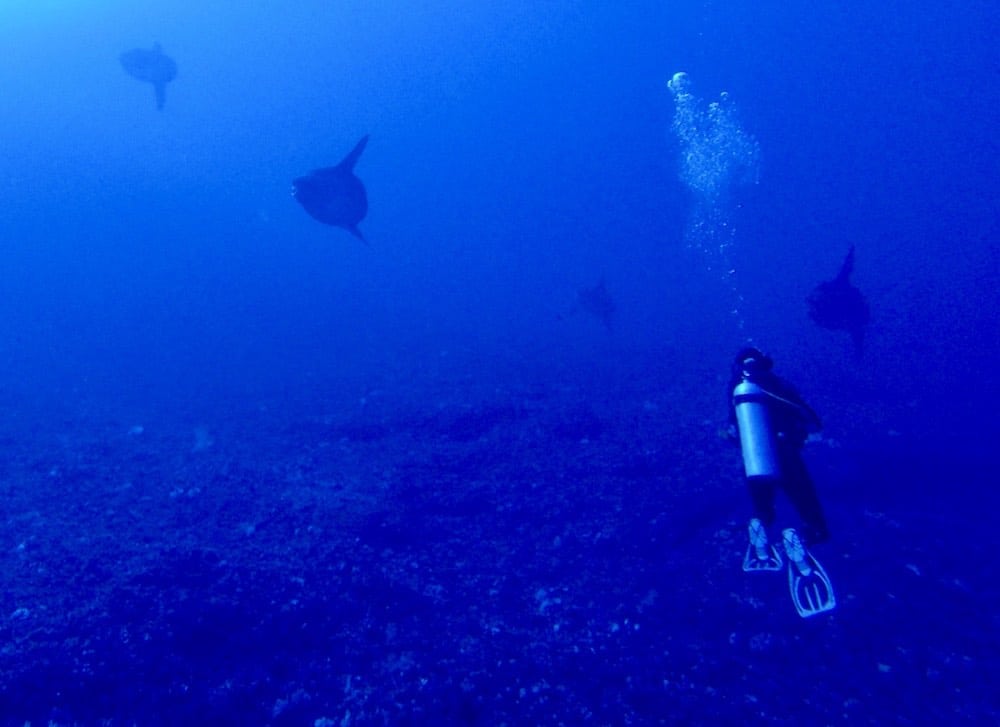 4 of the 14 sunfish spotted at Gamat Bay

June 7, 2019. As often Warnakali makes his first morning dive at Manta Point. And as often Yann takes his guests a little away from the beaten track to avoid meeting more divers than Mantas. They saw manta rays, which is the primary objective of this site. But they also met a sunfish and shot this photo of a “Mola Manta” ! 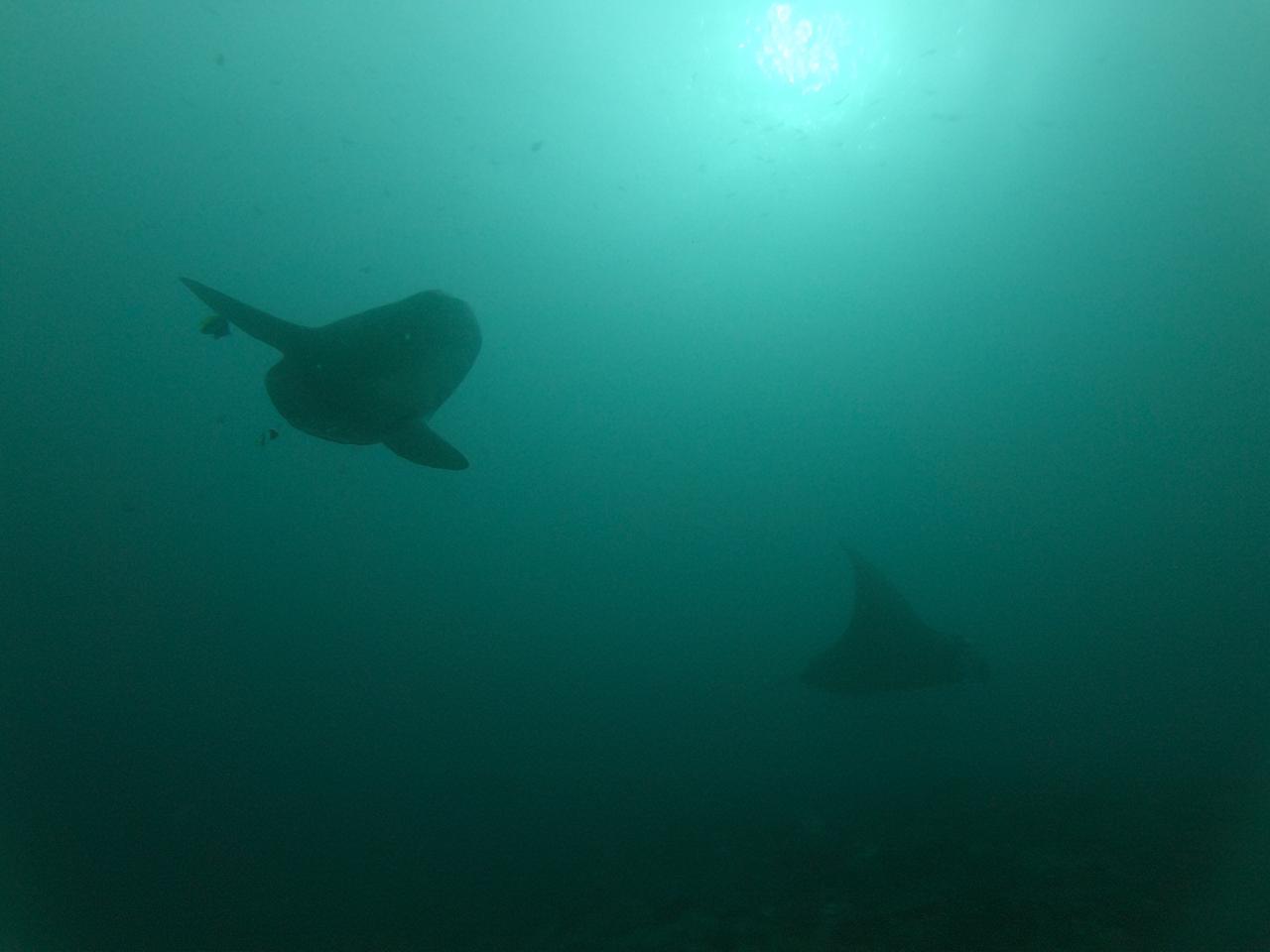 Sunfish and a Manta Ray

4 Mola Molas and a Manta Ray

August 31, 2019. Célia, who joined Warnakali the whole 2019 season as an instructor, brings her guests to Manta Point. And there, bingo again : 4 beautiful Mola Molas with a Manta ray ! Christine and Jean-Philippe, dive master trainee with Warnakali dive center, took some awesome photos. And a pretty hilarious video ! I will post it soon. 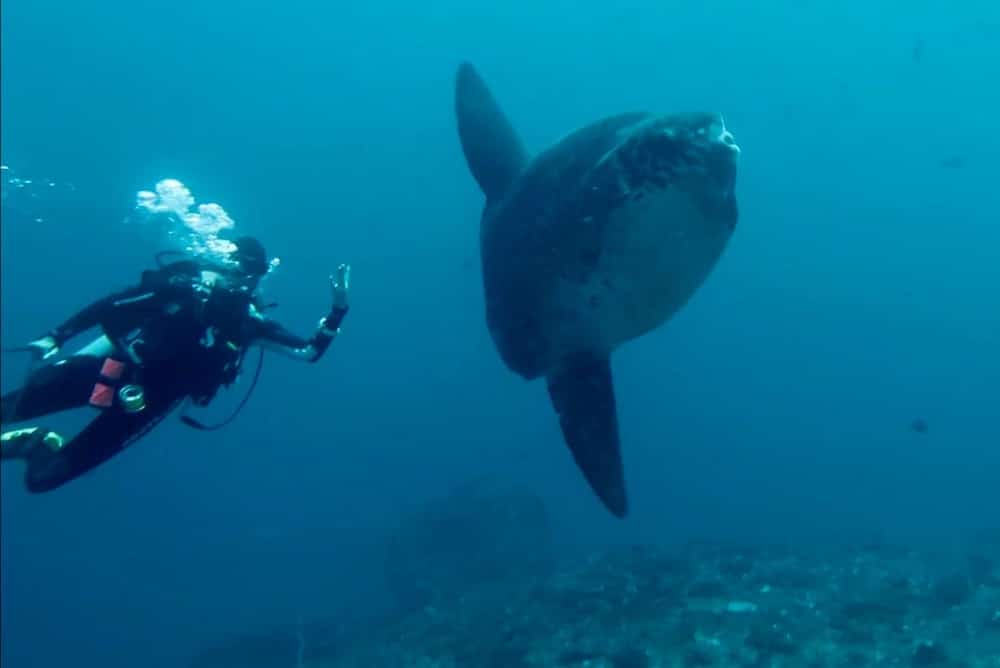 There are also Mola Mola elsewhere in Bali

November 13, 2019. Yann takes us on a short trip to Gili Tepekong, in front of Padang Bay. It’s a nice boat ride from Toyapakeh in Nusa Penida, where our boat is based. I will long remember the first dive in the morning, which was clearly not a long, calm river. But also the second, with a giant Mola Mola who followed us for almost the entire time of the dive. 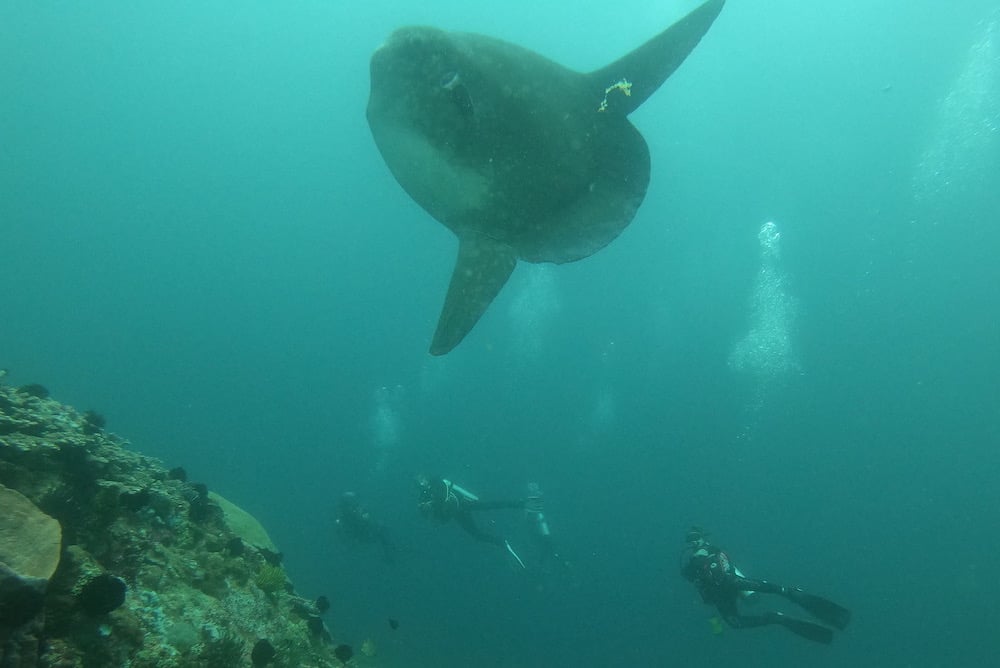 Ready to meet your first sunfish ?

Warnakali dive center will be happy to guide you on the different diving sites of Nusa Penida and Bali. You may see sunfish all year round, but if you want to maximize your chances of meeting one, schedule your trip between July and October. And try to plan several days of diving, because the odds are not 100 %.

Some centers will offer you to dive at Crystal Bay every day until you meet one. But whatever the beauty of the site, you will quickly get tired of the second corner of Crystal Bay. And as you may have read above, it is possible to find it on all the diving sites in Nusa Penida. It is just a matter of selecting the right dive guide.

The chance are low to meet a sunfish during a discovery dive, because we find him usually below the 12 meters maximum depth for discovery divers.

However, if you are certified, we can take you on a search for a fun dive or a diving safari. It is also quite possible to take advantage of open water, advanced open water, rescue diver or dive master training to meet the sunfish. As well as all the incredible flora and fauna of Nusa Penida. Some very beautiful dives in perspective in any case !