Kelingking is a spectacular rocky break in the sea. I went there for the first time in April 2017, almost two years after my first visit to Nusa Penida ! The place was deserted at the time ... There are much more tourists now but the place is very spectacular and deserves the trip.

Kelingking Beach is one of the most famous spot of Nusa Penida. Major travel sites use its photo to advertise Bali and even sometimes Indonesia. The place is indeed very spectacular and really amazing. The rock of Kelingking Beach looks a little like the backbone of a dinosaur that would drink in the sea. And by the way, on Google Map the bay is called T-Rex Bay. If you are lucky you may even see Manta rays from the top of the cliff.

The esplanade overlooking the rock is now very popular with tourists and drone pilots. This is one of the places that contributed to the tourist development of Nusa Penida island, especially through social networks. Kelingking also means pinky finger in Indonesian. But it’s a little more complicated to understand why. Or it takes a lot of imagination …

And tourists are not lacking in creativity to try to think out the box to make THE different picture. Be careful though, some have pushed the adventure too far. A press article reported in 2019 the accident at Kelingking Beach of a young Russian girl riding a scooter along the cliff, who fell down from the cliff. The article even mentioned that the scooter remained intact at the top of the cliff…

If you decide to go down to the beach (and I encourage you !) be careful hiking down the cliff. Take some water to avoid getting dehydrated. Wear a hat to avoid sunstroke. And above all, take good shoes. The first time I went down, I wore flip flops. It was not a good idea.

Once down, you will discover a very beautiful beach. It is tempting to swim but watch out for the waves which can be very powerful. And also to the currents that can drag you offshore in the ocean. Kelingking Beach has had several deaths by drowning, so the warning is for real. It may be better to stay in shallow water if you are not a good swimmer.

I hope I did not discourage you with all these warnings, because it is really worth taking the time to go down to the beach and have this experience.

Down to Kelingking Beach

Kelingking Beach : do you really deserve it ?

Kelingking Beach is one of the most beautiful beaches in Nusa Penida island. And in my opinion in Bali in the “wild beach” category. Even if you don’t want to go all the way down, take the small path that goes down along the ridge line, at least for a few meters,. You will be much quieter and the photos will be much better. Another piece of advice, take your photos before going down, you will probably be less photogenic after climbing back …

The first part of the trail, along the ridge line to the first turn is also quite easy. And you can check there if you have the courage to go all the way down to the beach. If you have children, you may want to stop there. And rather go to Crystal Bay or Atuh Beach, which are more accessible with children.

The trail then continues to the beach. I went down there several times, before a fire burnt all the vegetation of the cliff. The fire destroyed the whole complex system of ropes and wooden poles built to facilitate the descent. But the trail to the beach has been rebuilt since.

Do not give up halfway through. Because climbing up is easier than climbing down. You are indeed facing the slope and it is much more reassuring and therefore paradoxically less tiring.

How long to go down to Kelingking Beach?

It takes half an hour to get down to Kelingking Beach. It is essential to wear good shoes and to pay particular attention to your steps. Signs indicate that access to the beach is under your sole responsibility. And allow 45 minutes to climb back from the beach.

How tall is Kelingking cliff ?

For those who love records, here are the challenges to beat.

The speed record to go down to Kelingking Beach : a young guy, particularly athletic, who did not want to leave his girlfriend alone too long, went all the way down and then back up in 20 minutes (as he said). He was obviously very much in love and / or very jealous.

Going down to Kelingking Beach twice in a row : Another tourist realized, back to its scooter, that he forgot the keys at the beach. He went down a second time to look for them. And he found them !

Going down to Kelingking Beach daily : There are now vendors bringing down cold drinks every day and selling them on the beach. They probably did not learn the law of supply and demand because they sell their drinks at the same price as everywhere else. I assume they finish their day when the cooler is empty but maybe they refill several times a day.

Down there, the beach is awesome. But be careful, as everywhere in Nusa Penida island, waves and currents can drag you off. 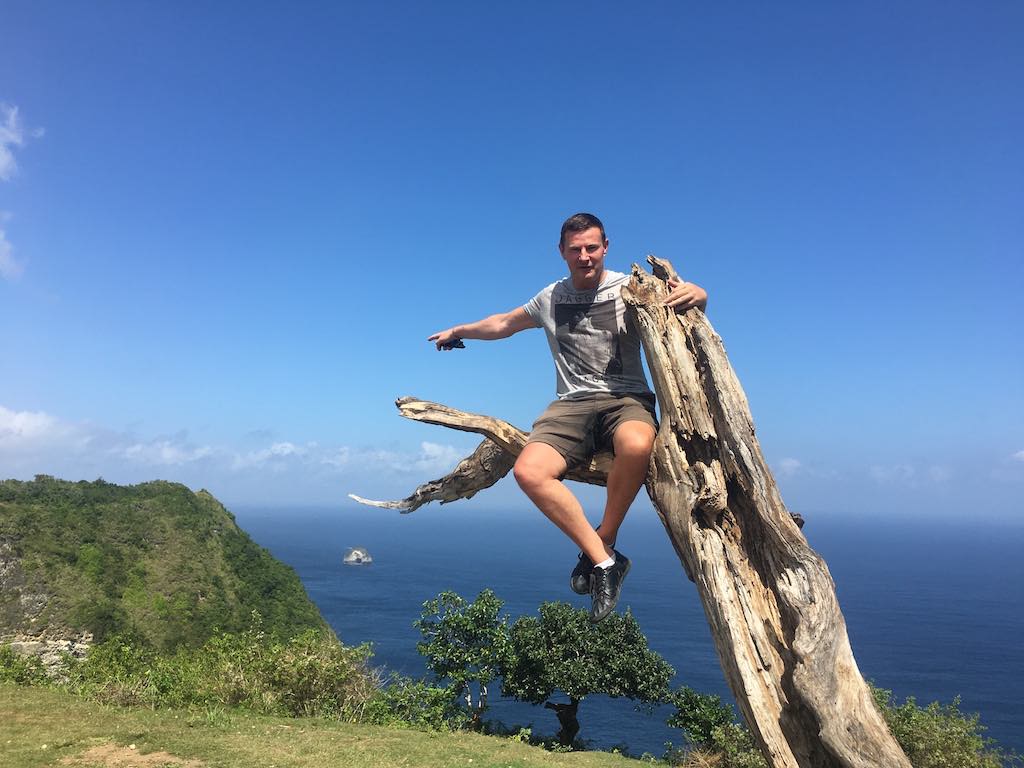 The tree of Kelingking

How do you get to Kelingking Beach ?

The road to go to Kelingking Beach is pretty good now, except for a small portion of it. It is therefore quite easy (at least much easier than one year ago) to go by yourself riding a scooter. But the trafic may be very dense and you need to be careful on the road. And if you are a group of 4 or more, it may be easier to rent a car with a driver.

From Toyapakeh turn left after the village of Sakti (the right road goes to Crystal Bay). Then my recommendation is to take the second road on the right and go through the village of Batumadeg. The distance is a little bit longer but you will save time because the road is much better and there will be less trafic. At the end of the village of Batumadeg, turn right towards Kelingking Beach. This will be the only portion of the road that remains to be renewed. It will take you around 50 minutes to reach Kelingking Beach from Toyapakeh, from Crystal Bay or from pretty much anywhere in Nusa Penida. You will have to pay an entrance fee of IDR 5,000 to access the site. About 30 cents, it’s quite reasonable ! 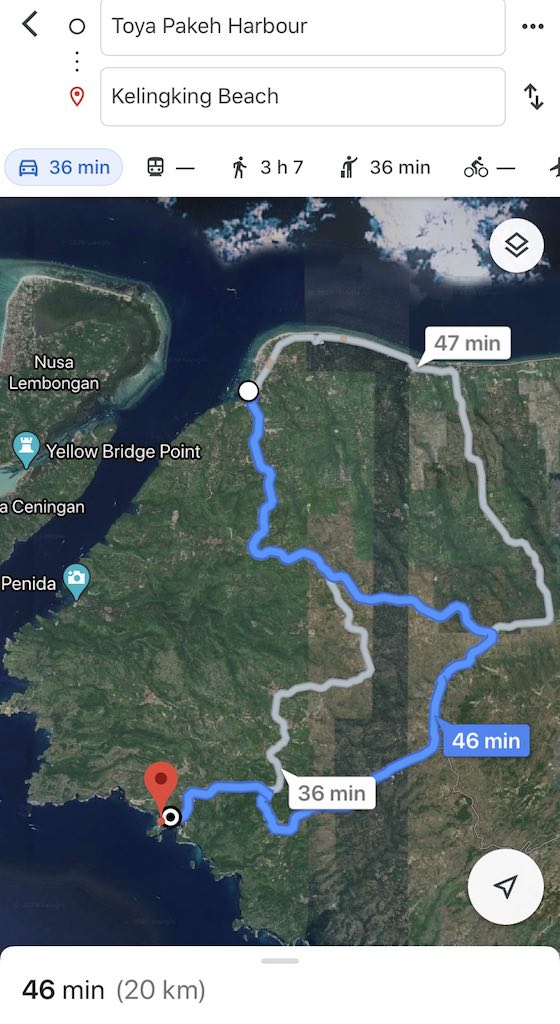 How to get to Kelingking Beach

There are many options to combine the visit of Kelingking Beach with other places to see. Check here some ideas of tours in Nusa Penida including Temeling, Broken Beach and Angel Billabong.

And you can find also more practical information, including how to drive and how to get around in Nusa Penida.

How do you get from Bali to Kelingking Beach ?

What is the best time to go to Kelingking Beach ?

Many tourists choose to visit Nusa Penida with a daily tour. And Kelingking Beach, together with Broken Beach, is usually part of these daily tours. It is therefore better to avoid the peak time of the visits which is 11 am till 3 pm. But the beach is in the shadow of the cliff in the morning. So if you plan to go down to the beach, the best option is probably to go to Kelingking Beach around 3 pm. Or even 4 pm to 5 pm if you only plan to enjoy the view from the top. Sunset can be spectacular, but then you will have to go back in the dark which may not be the best idea if you are not confortable to ride a scooter at night.

What to do after Kelingking Beach ?

Many warungs opened on the esplanade. You can drink fresh coconut milk, fruit juice or eat a nasi goreng or a mie goreng.

You can also have your picture taken on the branch of a dead tree. He had to suffer the assaults of many tourists and the highest branch is now broken.

If you have taken a sarong with you, take a ride to Pura Paluang, taking your first right when leaving Kelingking Beach. This temple, also called Pura Car, has an altar dedicated to the god who protects the cars. Very kitsch but fun, and you will have a beautiful view of Batu Bolong which inspired the logo of Warnakali dive center. 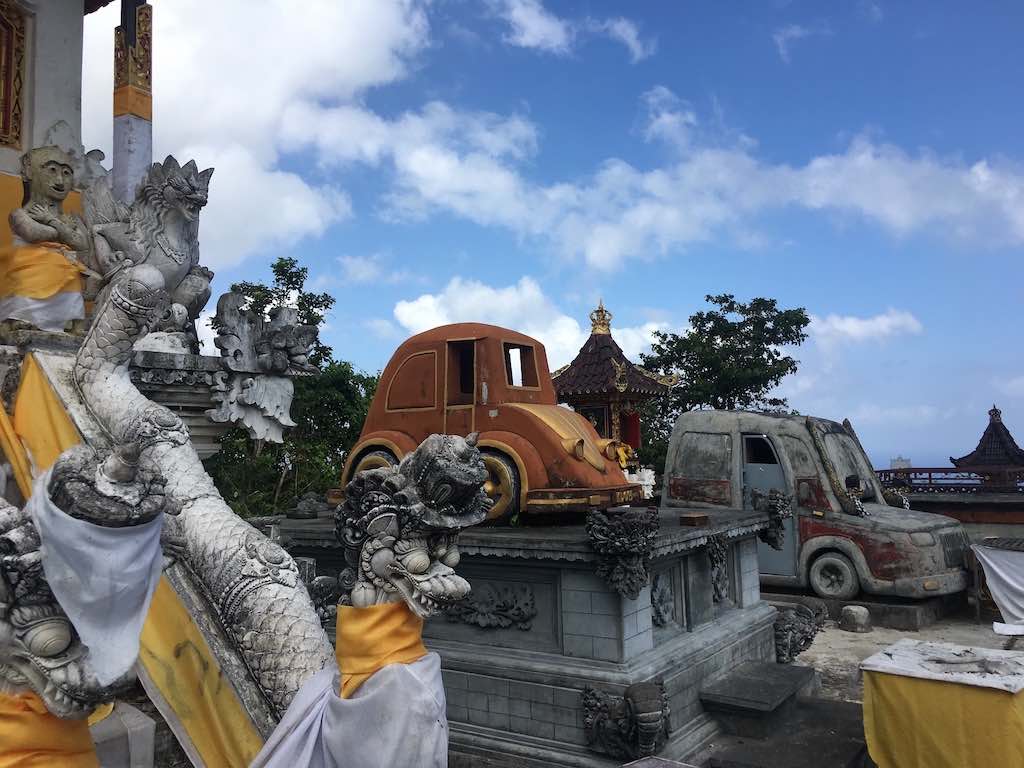 If you go diving at Manta Point to see the Manta rays you will pass with your boat in front of Kelingking Beach. A very different viewpoint but also very beautiful ! 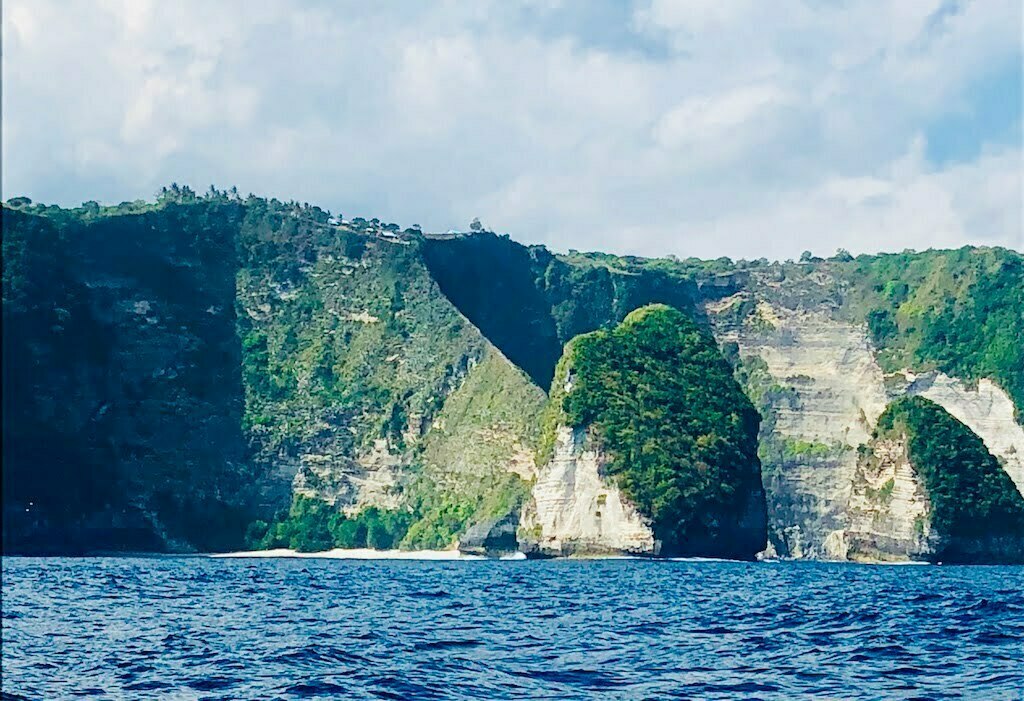 Kelingking Beach from the sea