Goa Giri Putri temple is the most visited temple of Nusa Penida. Be careful not to miss the secret entrance because it is pretty narrow. And you will then enter into a huge cave, very impressive.

Goa Giri Putri, a place of pilgrimage for the Balinese

The temple of Goa Giri Putri is located inside an impressive cave. It is indeed the biggest cave of Nusa Penida island. Many Balinese make the trip from Bali to Nusa Penida specifically to follow the complete course of purification which includes five stations inside the cave, in addition to the initial ceremony before entering the cave. Balinese also come because the water flowing from the spring in Goa Giri Putri Temple is holy water. It contains natural strength that can cure the disease. You will spot people coming for the ceremony easily on the speed boat, dressed in white and bearing their offerings. But most of them will come back on the same day to Bali because they are scared by the reputation of the island. Pura Goa Giri Puri is one of the 15 places to visit in Nusa Penida. 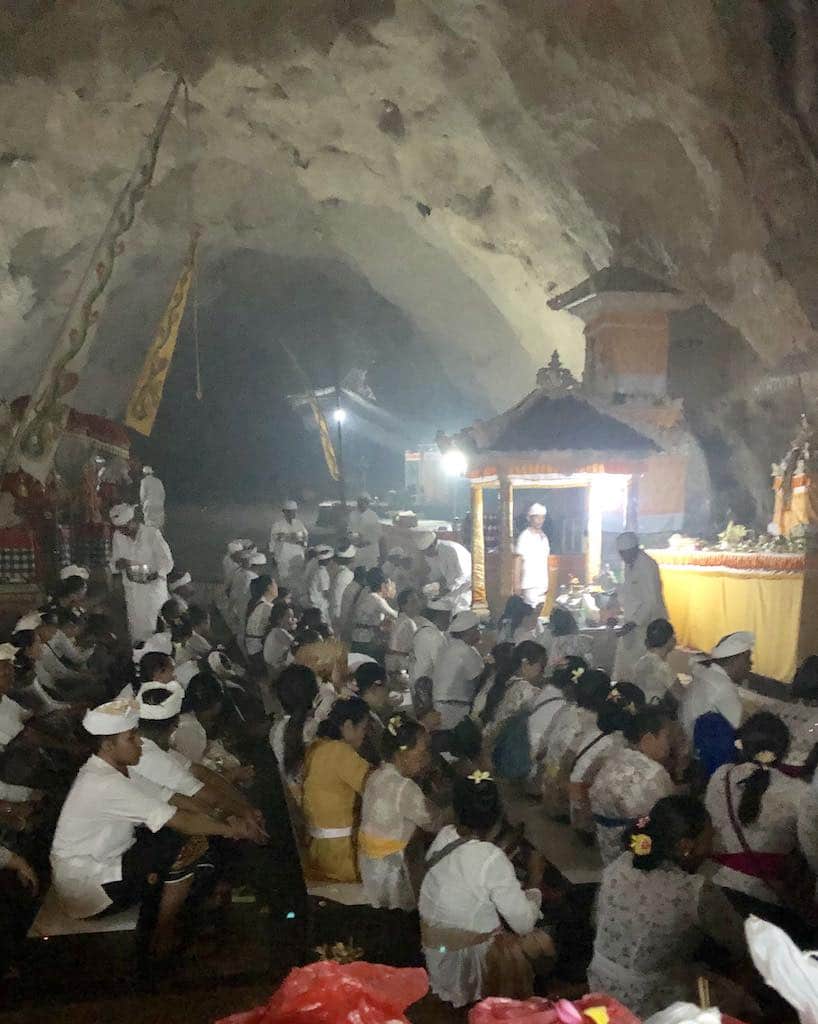 ceremony inside the temple

“Goa” means cave, “giri” means hill and “putri” stands for a symbol of strength. And “pura” means temple. So Pura Goa Giri Putri is a very descriptive name fo a temple built inside a cave in a hill dedicated to Shiva. Shiva’s role is to destroy the universe in order to re-create it. Shiva is part, together with Brahma and Vishnu, of the triumvirate in charge of the creation, the preservation and the destruction of the world. 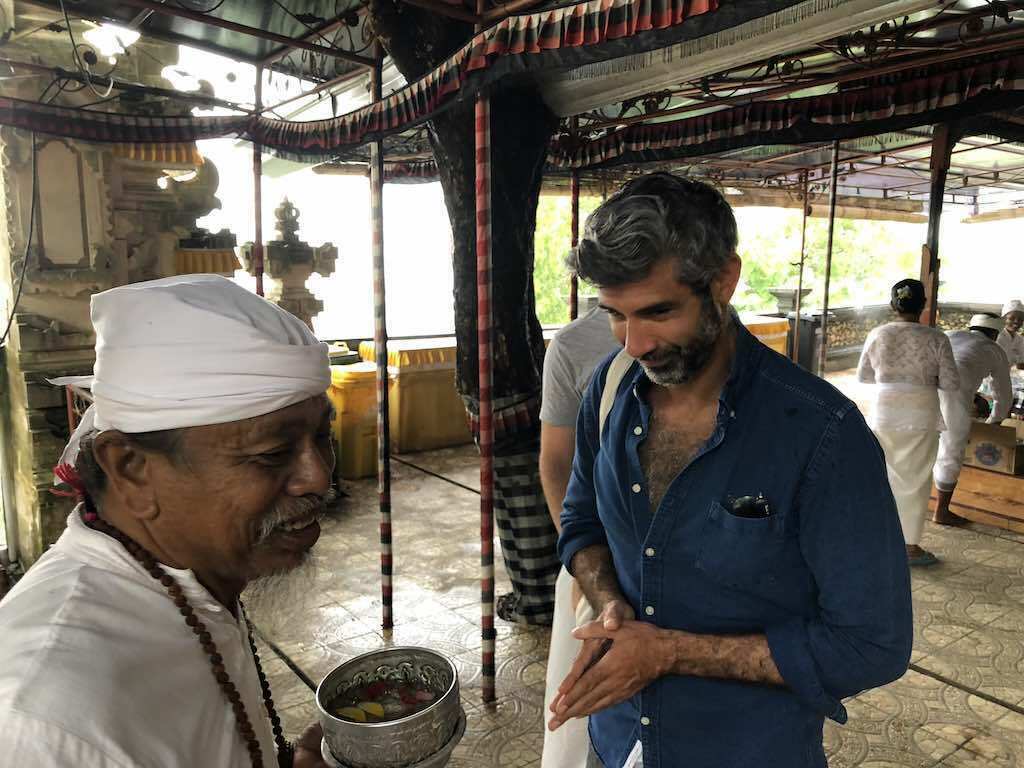 How to get to Pura Goa Giri Putri ?

The temple is accessible in 30 minutes from Toyapakeh following a brand new road along the north coast of Nusa Penida island. You can rent a sarong in the small shop selling drinks if you do not have one. Cross the road and climb around fifty steps. After a donation (20,000 IDR per person) and a quick purification ceremony you will be ready to enter the temple. The priest will probably show you the entry because it is not easy to find. You enter almost crawling through a very small passage. After a few meters you will reach a huge cave. There is artificial light so you will not remain in the dark. Follow the path and  walk among the different temples. The purification process takes place at each temple inside the cave and lasts about 2h30, but you can go faster. 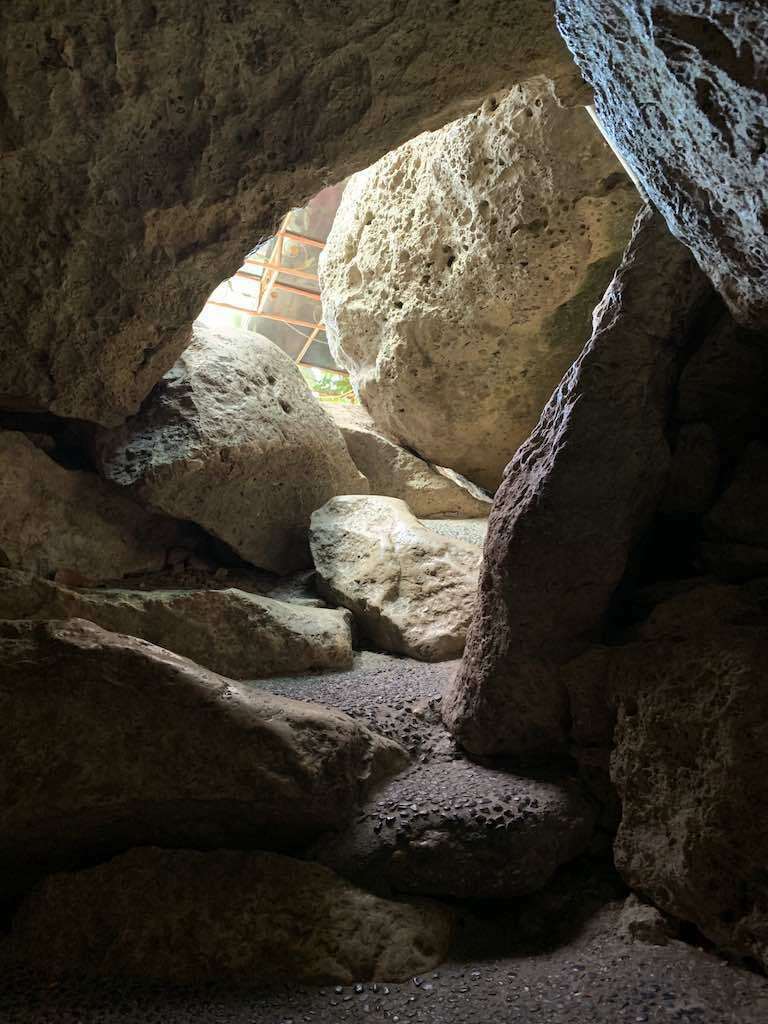 entrance of the cave

You will see in the middle of the cave a small staircase going up. Depending on the priests present you will have the right or not to go up there. If you are a little bit claustrophobic it is probably a better idea to abstain. Because the space is quite small and a little suffocating. A kind of cave inside the cave !

And find here how to get to Nusa Penida from Bali. 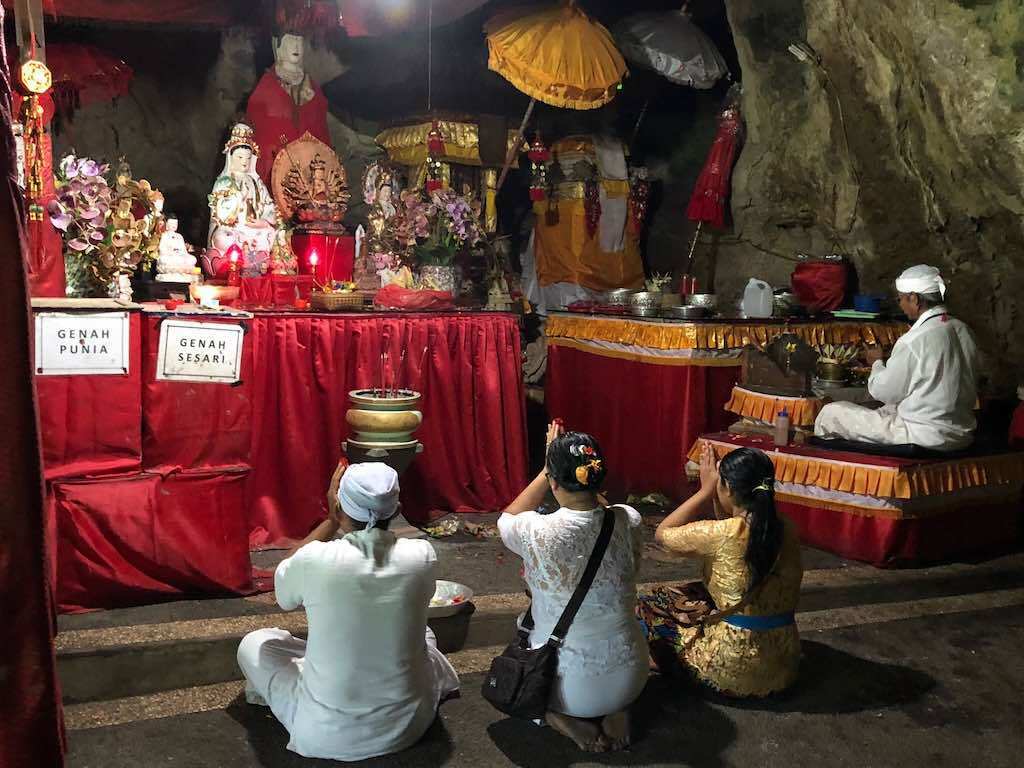 But do not miss the last ceremony at the last temple of the cave. It is open to tourists. The priests doze sometimes lying on a bench but I have never seen them refuse a ceremony. There are actually two ceremonies because the temple is mixed, Hindu and Buddhist.

At the end of the Hindu ceremony, the priest will tie the famous Balinese red white black bracelet on your wrist. This bracelet is composed of three red, white and black cords which represent the three gods of the Trimurti : Brahma, Vishnu and Shiva. You will need to drink three times the holy water poured into your hands by the priest. You will finally take a few grains of rice that you will stick on your forehead.

At the other Buddhist ceremony, the priest will bring you through a purification and meditation session. Don’t be worried, it’s very brief ! He will also mark you with some ash on your forehead. This temple is dedicated to the Chinese Buddhist goddess of compassion, Guanyin.

Plan to give a small donation after the ceremonies. You then get out from Goa Giri Putri temple by the other end of the cave, which offers a beautiful panorama over a small valley. 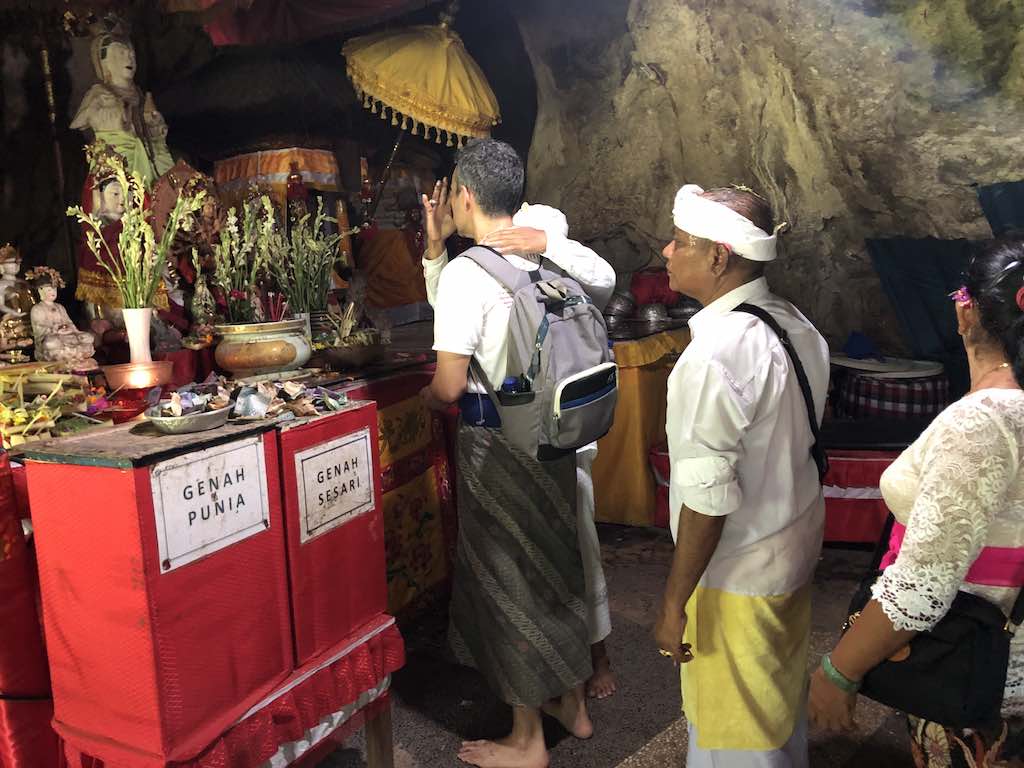 You can follow up with a tour to Atuh Beach and Diamond Beach. Read our page about tours in Nusa Penida.

And to know more about Balinese temples you can visit our page about culture and history of Nusa Penida.