Crystal Bay combines the attractions of a sandy beach easily accessible by road, a spectacular rock in the middle of the bay and a famous spot for scuba diving or snorkeling. One of the top places in Nusa Penida.

Crystal Bay Beach is easily accessible with a scooter from Toyapakeh Harbor and the road is brand new. The sunset, in front the beach, is one of the most spectacular in Nusa Penida. ?

But you can also spend a nice day there before sunset, enjoying the beach and the sea, or just relaxing in the shade of a parasol.⛱ And if you are very lucky you may see dolphins there. ?

Crystal Bay is, together with Gamat Bay, one of the best snorkeling sites of Nusa Penida. You can rent all the snorkeling equipment on the beach to discover the coral and marine life of Crystal Bay. You can see turtles quite regularly. ? However, be careful as currents can be very strong, as almost everywhere in Nusa Penida. Do not forget your fins and do not go too far from the beach. To make it short, do not go past the mooring points of the boats that are parked in the bay.

And do not try to reach the rock in the middle of the bay either. Even if it is tempting to go and see the small temple built on top of the rock. And finally, do not swim on the right side of the bay because the waves may drag you on the corals at low tide. In short, if you respect all these instructions, swimming and snorkeling with mask, fins and snorkel is very nice!

The beach is also an easy starting point to take a boat trip to see Manta Rays at Manta Bay. You can book the trip with your hotel or try to ask to any captain early in the morning.

Crystal Bay and the Mola Mola

Crystal Bay is also one of the most popular diving spots in Nusa Penida during summer. Why ? Because there is a good chance to see the famous sunfish or Mola Mola, mole or sunfish! Whatever his name, when we find ourselves in front of this fish it’s a great moment ! It is over 3 meters in diameter and weighs over a ton. During summer, when the water is colder, it goes back from its usual depths (a few hundred meters) to the surface (25 to 30 meters).

Some say they saw him while snorkeling. But at this depth it is more likely to meet the Mola Mola with the right scuba diving instructor, who will guide you safely to the right place. I took the picture below of Yann and his Mola Mola with my GoPro in September 2017: my first Mola Mola ! Yann, the manager of Warnakali dive center has dived more than 600 times at Crystal Bay.

But Crystal Bay is a beautiful dive spot all year long, even when it’s not the Mola Mola season! 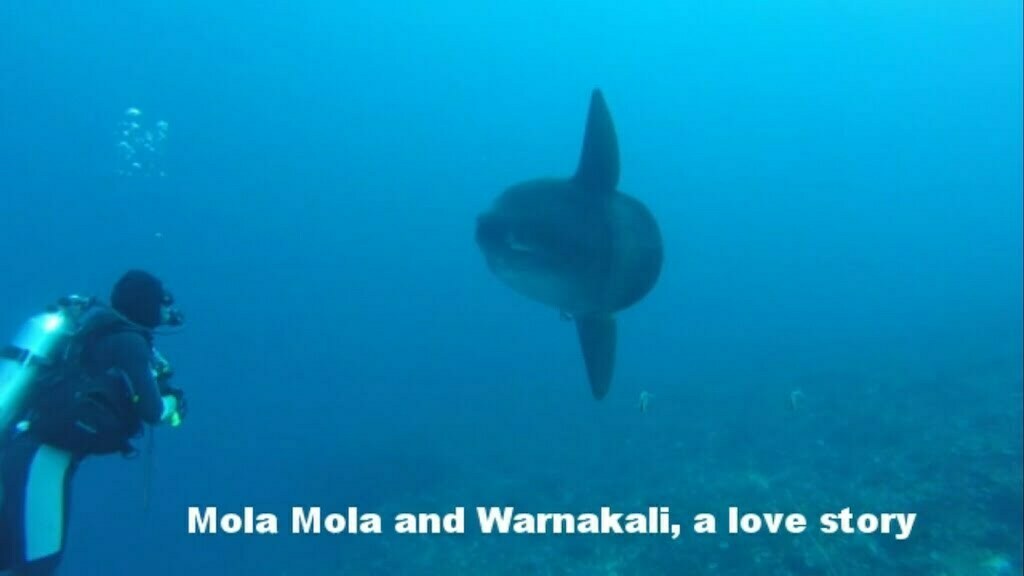 I was also pretty lucky to saw a lot of them before diving at the surface, and then while diving, underwater.

Surf and Volley-Ball at Crystal Bay

The waves are not very big but locals practice sometimes surfing on the left side of the beach. There are also very often volleyball matches behind the beach.

The beach is very nice all day, on a deck chair in the shade of a parasol. It is the most easily accessible beach of Nusa Penida. You can also order a drink, a coconut or basic snacks. It was possible in 2016 to have dinner there, but the government operated a commando operation with the army, police and bulldozers. All illegally installed buildings were razed and burned. The population was obviously rather traumatized. Two interpretations prevailed at the time: some saw it as a sign that the authorities wanted to enforce the law and preserve the authentic character of the island. Others saw the desire to make room for the installation of a luxury hotel. For now the beach is preserved, so let’s enjoy it ! 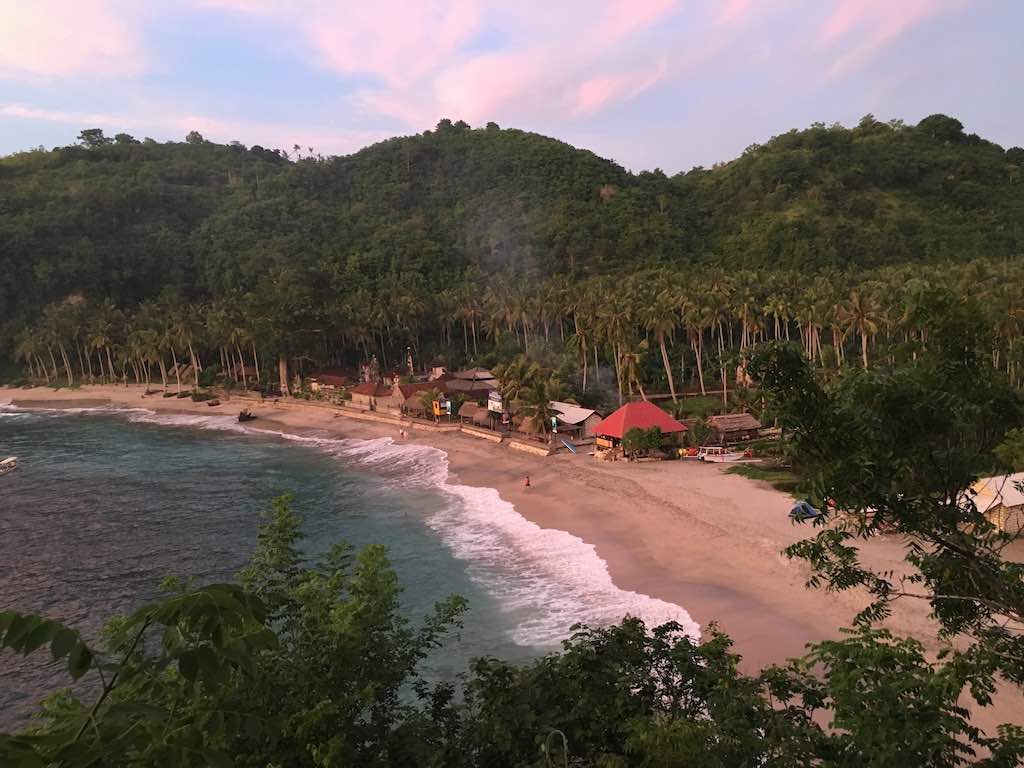 Another great time of the day in Crystal Bay is the sunset, starting at 5:30 pm. The sun does not set always at the same place in the bay, as it depends on the season. But if you are lucky you will manage to take the picture of the setting sun aligned with the small arch of the rock in the middle of the bay ! After sunset, the sky is often colored with red, pink and orange hues.

A good option may be to climb a few flights of stairs up to the top of the hill, at the end of the beach. The sunset is also pretty amazing from there. And if you go there during the day, a trail will take you to a second beach, still generally deserted. And for those who enjoy walking, you can even reach Broken Beach from there in less than 2 hours. But you need some courage and good shoes !

And if you want to have nice cocktails of food close to Crystal Bay you can pay a visit to Amok sunset bar and restaurant.

Crystal Bay combines the attractions of a sandy beach easily accessible by road, a…